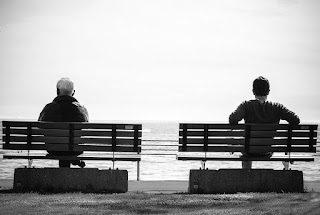 The true meaning and purpose of communication among human beings is to reach greater understanding in order to create unity, and eventually arrive at truth. The exemplar, of course, is Christ.

When Jesus spoke to an individual or a group, he already knew their inner hearts and whether or not their purpose was sincere. He spoke to each in a way they could understand, or that would cause them to reflect afterward. Hence the parables, the wisdom and appeal of which have survived the millennia. And his devastating responses to the Pharisees' trick questions. It pleases me to imagine that these highly politicized religious leaders stayed up late nights trying to think of questions that would stump or compromise Jesus, whereas he slew them with quick-witted one-liners that were nonetheless neither unkind nor untrue. That doesn't mean his replies weren't painful – the truth hurts, and so does losing a contest, especially for the type of people who want to win at all costs.

The value of true communication is beautifully exemplified in the story of the Samaritan woman at Jacob's well (John 4:1-42). Jesus knew who she was and her true state in life, and a sorry state it was. He invited her to drink at the well of living water that never runs dry. Her response was to call the whole town together to meet him. Many Samaritans became believers as a result of this encounter.

Jesus spoke to the Samaritan's woman heart, and offered her what she needed most. True communication serves to fill deep human needs, and creates meaningful and holy relationships.

What a gift it would be to communicate as simply and effectively as Jesus did. Most of us can't, but through the application of prayer we may be able to receive intuitive leadings that will help us communicate better. We can also practice reflective listening, which is the art of conversing with an open ear and open heart, as well as an open mouth. This powerful skill puts the other person first, and allows one to find out what is really going on behind the façade of the other person's bluster, aggression, distraction, or insecurity, all of which are barriers to heartfelt communication.

'Reflection' implies both thought and a mirroring process. If there is one thing that communication is not, it is a one-way barrage of opinion or dicta that demands a closed – that is a forced or non-reflected – response from the hearer. This is manipulation, not communication. It is not a path to the truth. Remember Adolf Eichmann, who oversaw the extermination of six million Jews under the Nazi regime. "I merely carried out orders," he said at his trial two decades later. "Where would we have been if everyone had thought things out in those days?"

Unfortunately, many people today are no more interested in communicating truth than the Nazis of the twentieth century or the Pharisees of the first century. Since we are in an election season, the subject bears extra consideration. Beware the politician who stays up late nights, thinking of clever ways to portray important subjects in a one-dimensional way, or intentionally misconstruing the opponent's statements. A key aim of the "win at all costs" contender is to frame the issues in a way that makes people who hold alternative or more complex views look stupid, ridiculous, or uncaring. Insist on thinking things out for yourself, no matter what.

It's hard to communicate clearly in a fallen and imperfect world, even when we mean well. But let us try, and be gentle with one another when misunderstandings arise. Above all, keep the lines of communication open.

Check out the paperback edition