Let Every Heart Prepare Him Room

By Cynthia Edwards
An essay in the book Creative Spirit Musings

There are people in my neighborhood who spend thousands of dollars every year turning their properties into Christmas wonderlands, both inside and out, and providing their near and dear ones with all the gifts their hearts desire.

They have kicked Christmas up a notch since the first one, two thousand years ago.

The original Christmas story tells us about the struggles of a man named Joseph and his heavily pregnant wife, Mary, who were obliged to travel from their home in Nazareth to the backwater village of Bethlehem.

They were participating in a census of Roman-controlled lands ordered by the Emperor Augustus. In those days, people had to travel to their father’s place of birth to be counted, and foot and mule travel were the only modes of transportation that would have been available to the average person.

Any woman who has been nine months pregnant will understand how physically difficult this journey must have been for Mary and her concerned, and probably much older, husband. 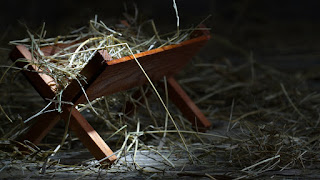 In the little town of Bethlehem, there was much confusion and congestion. So many other people were arriving at the same time, Joseph and Mary could not find an inn with a spare room. The best they could get was permission to bed down in a stable, situated in a cave, sheltering with beasts such as oxen and donkeys. Mary went into labor that night, perhaps brought on by the exertions of travel, and Jesus was born.

Having no crib, Mary placed her baby in a manger. In case you are not sure what a manger is, it is the trough where feed for livestock is placed. Imagine the muck. The reek. The danger from cattle kicking out petulantly. Imagine the parents’ desperate desire to protect their fragile newborn – and their own discomfort in the cave. 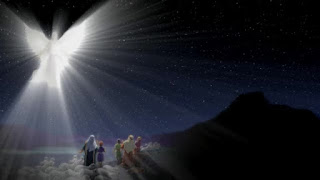 Meanwhile, in the fields surrounding Bethlehem, supernatural events were occurring. Shepherds saw visions of angels joyously proclaiming the birth of the Savior. Somewhere in the middle distance a camel caravan, carrying three wealthy and educated seekers with their retinues, was approaching Bethlehem in stately fashion, in search of this very obscure Baby. They were guided by a supernova that miraculously lingered in the skies above the stable.

The paradox of the story is amazing. So amazing, we lovingly recreate it every Christmas in our churches and homes, in living tableaux or in crèche scenes with figurines and scenery. The poverty of Christ’s birth is transfigured by our understanding of the eternal significance of the event.

In the year 1223, Saint Francis of Assisi became the first person to recreate the crèche scene to celebrate our Lord’s day of birth. Francis had seen the Cave of the Nativity in his travels to the Holy Land, and his theatrical imagination, coupled with his passionate love for Christ, inspired him to duplicate the scene in the steep hills above Greccio in central Italy. He intended to “set before our bodily eyes in some way the inconveniences of [Christ’s] infant needs, how he lay in the manger, how, with an ox and an ass standing by, he lay upon the hay where he had been placed.”

All of the townspeople of Greccio were invited to celebrate Mass at this ‘new Bethlehem,’ but they were not told of what preparations were being made. A thousand people – shepherds and wise men among them – climbed the hills that Christmas eve, carrying lanterns and torches, lighting up the night. When they finally made their way to the clearing and beheld the scene, their hearts were as deeply touched as if God were actually made manifest before them. One can almost hear the angels singing joyfully, as of old.

The paradox continues on today. In poverty and humility of spirit we can find the finest riches of Heaven. This Christmas, amid the shopping, decorating, and celebrating, I hope we will all make time to contemplate the mystery and glory of Christ’s birth. The King of Heaven was born in a cave because there was no room in the inn. Let us not make the mistake of pushing Jesus out of our Christmas celebration because there is no room for Him in our hearts.

Joy to the world! The Lord is come
Let earth receive her king
Let every heart Prepare him room
And heaven and nature sing!
-- Isaac Watts, 1719 © 2004 by Cynthia Edwards. All rights reserved.